Playing around with streamlit dashboards

A few weeks ago I have stumbled upon this post on hackernews containing a captivating piece of data visualization on the development history of git. I believe the visualization is particularly powerful for a few different reasons:

Lacking a traditional background in computer science, I’ve never thought of the type of data that could be generated by the development process itself. This sparked my interest to build a simple dashboard with the following requirements:

I am a long time {shiny} user and it is hands down my go-to library for any dashboard that goes beyond average complexity. Over the years, its development process has greatly improved, going from monolithic files to libraries supporting a more modular and workflow-oriented approach.

In the past year or so I’ve been working mostly on Python projects as putting R in production is not a viable option, as most of the clients I’ve dealt with wouldn’t have internal resources to maintain production-ready R code. Instead of building yet another Shiny app, I set myself to find something equivalent in Python.

Surprisingly enough, finding something as mature and easy to use as Shiny has being sort of a struggle. The following are a bunch of libraries I’ve found during research and not all of them have been researched in much detail (hence feel free to disagree on any of the comments below):

After some research I decided to give streamlit a go as it offers the right amount of interactivity and its layout approach, albeit being a bit restrictive, looks flexible enough to churn out something decent in a relatively short amount of time.

The project has been structured in the following way:

This allows to keep the app organized in three distinct blocks with the following logic:

Following the logic above, a very stripped down app might look like something in the lines of:

I am sure there are plenty of better ways to organize code especially for larger projects (leveraging folders for instance), but the current structure has been more than enough for the size of this experiment.

Coming from an R background it came pretty natural to have a look at {dplyr} commit history. As expected, it is clear how the bulk of the library was written by Hadley, Romain Francois, Kiril Muller and Lionel Henry. 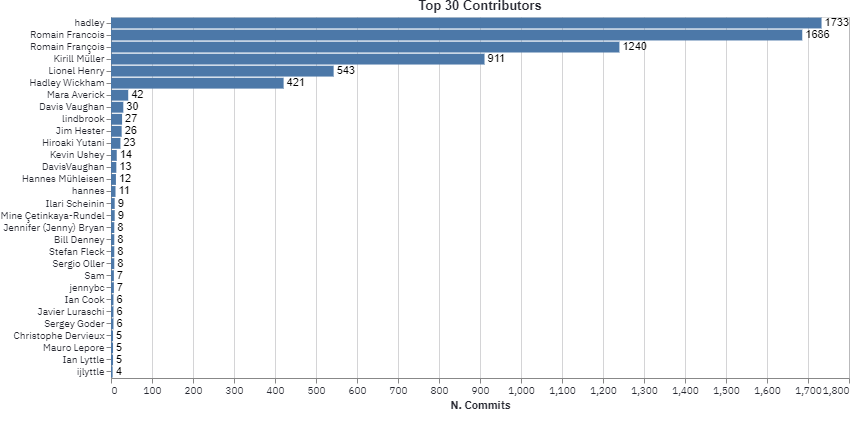 Also, it seems that most contributors have added a large number of lines around January 2021. This makes perfect sense as around that time dplyr 1.0.3 was released.

Rebuilding documentation is one of the central steps of R package development workflow, this can be spotted by comparing the number of daily commits and lines changed. Surprisingly there have been days in which the number of commits has been fairly small while having touched a large number of lines. Such pattern can be spotted in late January 2021:

In fact, on Jan 29 2021 a large update to the revdep/ folder (containing information on reverse dependencies) was performed, resulting in the deletion of revdep/failures.md and revdep/problems.md, each containing 50k+ rows.

As a bit of a surprise I’ve noticed some duplication in contributor names (Romain Francois vs. Romain François) which is completely fine given it is fairly common to change machines and rewrite your .gitconfig file over the years. I might add some de-duplication logic in some future revision.

For showcasing simple enough dashboards, if control over machine type and setup flexibility is not a strong priority, streamlit already offers a platform to publicly share dashboards. This solution is invite-only but it only took ~24h to get an invite code in my case.

To set it up it is enough to have your dashboard files in a public repository (containing a reuqirements.txt file) and deploy a new app from the GUI. You can check the final result at this link.

When expecting large traffic volumes on a dashboard, Google App Engine can come to the rescue. This solution (as most of cloud providers) is particularly appealing due to managed auto-scaling features. The first requirement for the deployment is to have a Dockerfile in place, it might be something along the following lines:

Secondly, a app.yaml file, containing deployment settings (auto-scaling settings will be set in this file) is needed:

Finally, we can deploy everything with a simple one-liner:

After this step, we should find the url for the freshly deployed app in console output.

I’ve found streamlit extremely intuitive and was surprised by the extremely small number of roadblocks I’ve encountered. As of July 2021 I think the tool feels a bit like notebooks on steroids (not to be taken as a negative comment). While thinking about the whole journey, few points crossed my mind:

After deploying the app on streamlit share I’ve dropped a short post on r/Python to get some traffic and observe the dashboard behaving in a semi-realistic scenario. From the start it was clear how somehting in the app/repo.py script was causing problems as the machine kept dying when computing metrics for largish repos. Through line_profiler it is possible to inspect the execution time of every single line of code:

From the output pasted above, it is clear that line 26 is the culprit here. Apparently, this method from pydriller computes Delta maintainability scores for each commit. Commenting out that line has resulted in a 10x speedup in pulling the repo and building the dataset.